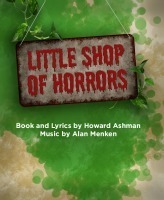 Directed and choreographed by guest artist Nathan Halvorson, who previously helmed FTT’s production of Cabaret (2013), Little Shop will feature puppets by special effects makeup artist and puppeteer RJ Haddy, who was a finalist on Season 2 of the Syfy channel’s reality competition series Face Off.

Based on the B-movie by Roger Corman and featuring music and lyrics by Howard Ashman and Alan Menken (Disney’s Little Mermaid, Beauty and the Beast, Aladdin), Little Shop of Horrors is perhaps best known for its alien carnivorous plant bent on world domination.  “But really it’s about the lengths to which you’ll go to get the things you want,” says Halvorson. “Even good people get lost sometimes.”

“We’re excited to follow up the success of Cabaret with a musical of arguably even broader appeal,” says Kevin Dreyer, FTT’s Director of Theatre. “The response to our announcement of Little Shop has been universally enthusiastic, as evidenced by the large number of students who clamored to be a part of the production. We expect it to be just as appealing to our audiences.”

Haddy, who will be in residence on campus for two weeks to train FTT student puppeteers, will offer a public lecture/demonstration about working with puppets, extreme makeup, and special effects at 6:00 pm on Saturday, November 21, between the matinee and evening performances.  A lifelong educator, Haddy has been called the “Emeril Lagasse of Special Make Up Effects instructors.”  Haddy attended The Joe Blasco Make Up Artist Training Center in Hollywood and immediately began working for Alterian Studios Inc., under world class effects artist Tony Gardner, where he had the opportunity to work on such big budget movies as Batman and Robin, There’s Something About Mary, and Contact.

On Saturday, October 31, the DeBartolo Performing Arts Center presented a free Halloween double feature of both Little Shop of Horrors films in the Browning Cinema. In the 1986 musical version, Rick Moranis plays the hapless Seymour who tries to win the affections of co-worker Audrey despite the insatiable appetite of his carnivorous plant, Audrey II. Roger Corman’s original version from 1960, which inspired the Broadway musical, features a cameo by a young Jack Nicholson as a masochistic dental patient.