THE BEAR and AFTERPLAY 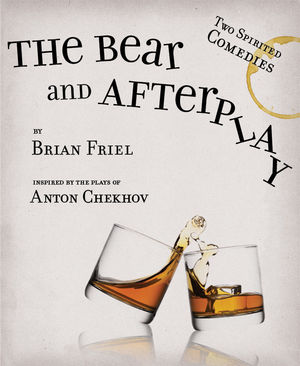 Directed by FTT faculty member Carys Kresny, the production is part of a campus-wide celebration of Irish history and culture, led by Notre Dame’s Keough-Naughton Institute for Irish Studies, that coincides with the centenary of the 1916 Easter Rising.

Brian Friel, who died in 2015, is widely considered one of Ireland’s greatest playwrights and often described as “the Irish Chekhov.” Both of these comic one-acts, presented together as one evening of theatre, are based on plays by the noted Russian playwright Anton Chekhov (1860-1904). The Bear is inspired by Chekhov’s one-act of the same title; Afterplay brings together characters from two different Chekhov plays - Sonya Serebriakova from Uncle Vanya and Andrey Prozorov from Three Sisters.

FTT has a departmental history with Friel’s work that spans more than 30 years, having produced Friel's The Freedom of the City in 1985, Lovers in 1992, and Dancing at Lughnasa in 1993, all directed by Professor Reginald Bain in Washington Hall.

“Thanks to our affinity for all things Irish,” says FTT’s Director of Theatre, Kevin Dreyer, “Friel’s work has had a special resonance on our campus for many years. We were greatly saddened by his loss last October, and we’re grateful to have this opportunity to honor him with this production.”