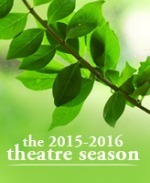 A summer wind spreads the seeds of curiosity and fans the dangerous flame of desire.

Book and lyrics by Howard Ashman
Music by Alan Menken
Based on the film by Roger Corman, Screenplay by Charles Griffith

Whatever you do, don't feed the plants.

A pair of comic one-acts based on the plays of Anton Chekhov - with a splash of Irish wit!

Adapted by Jon Jory
From the novel by Jane Austen

It is a truth universally acknowledged that a single man in possession of a good fortune must be in want of a wife.

Subscription packages include one ticket to all four shows.  Subscriber benefits include:

Can’t make your performance? Contact us up to 48 hours before your scheduled show and exchange to another performance of the same production for free.

20% discount to Actors From the London Stage performances, presented by Shakespeare at Notre Dame.

Subscribe on opening nights at no extra charge and enjoy a post-show reception with the cast.