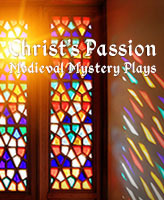 Presented as a prelude to Easter, Christ’s Passion enacts a Biblical journey from Creation to Doomsday, including the fall of Lucifer, Garden of Eden, Noah’s flood, and the nativity, crucifixion, and resurrection of Christ.