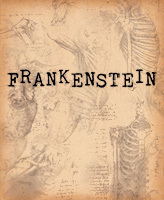 FRANKENSTEIN
By Tim Kelly
Based on the novel by Mary Shelley

The production marks 200 years from the summer of 1816, when Shelley conceived the idea for her Gothic novel, in which a young scientist constructs and animates a living Creature – with catastrophic results.

Kelly’s adaptation, described in its preface as “[p]erhaps the truest adaptation of Mary Shelley’s classic yet,” presents Shelley’s horror story in two swift acts, ending in “a horrific climax of dramatic suspense.”

Frankenstein is presented by special arrangement with SAMUEL FRENCH, INC.