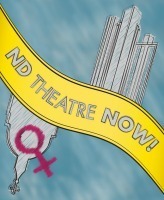 Through ND Theatre NOW, FTT annually showcases the artistic expression of its students in a mainstage production fully realized by student artists. This year, FTT student playwrights have the opportunity to workshop new plays that were developed through the Department's playwriting program, led by professor Anne García-Romero, who also serves as faculty advisor for ND Theatre NOW.

IN PARADISUM, written by Tori Babcock ('17) and directed by Jean Carlo Yunén Aróstegui ('17), explores the chilling consequences of an enforced Utopia. Life is perfect and happy in the country of Paradisum, especially for best friends Sophia and Emmy as they embark on their new adult lives. But when the town's most important law is broken, it becomes Sophia's job to investigate. She immediately enlists Emmy's help, unaware that her friend hides a secret that could destroy not only their friendship, but the carefully cultivated image of Paradisum itself.

THE PINK POPE, written by Taeyin ChoGlueck ('14, MFA '17) and directed by Mary Patano ('17), offers a satirical feminist take on the role of women in the Catholic Church. Up in Heaven, God is female, and She has a problem: Purgatory is full, thanks to misogynistic men who reject the feminine God. On earth, women have left the Church to organize under the Feminist Ultimatum, urging the Vatican - and men - to join them in building a new church. Recently elected Pope Gerie is visited by Archangel Bri, and together they plot a new strategy.