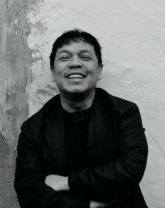 Areas of specialization: Directing/Playwriting, Semiotics, Comparative Studies in Theatre and the Other Arts, Butoh Dance, Theatre and Social Concerns

Internationally recognized for his work that often challenges convention, stunning visual poetry, and language in space, playwright and director Anton Juan is a Tenured Full Professor and Theatre director at the University of Notre Dame du Lac in the USA. He completed his Ph.D. in Semiotics at the Kapodistrian and Panhellenic University of Athens. To honor his contributions to the arts, Juan has been knighted twice by the French government, receiving the Chevalier de l’Ordre des Arts et Lettres in 1992 and the Chevalier de l’Ordre National de Merit in 2002. He received the Alexander Onassis International Award for Theatre (Playwriting), and the Special Jury Prize for Screenplay from the CineManila International Film Festival. Beyond his work at Notre Dame, Juan is also the founding Artistic Director of the Step of Angels Theatre in Athens, Greece and was the Director-General of Dulaang UP, University of the Philippines, where he has taught at the Departments of Speech Communication and Theatre Arts, English and Comparative Literature, and European Languages. He was also the Fellow for Drama at the Creative Writing Center of UP.

Earlier known as the “enfant-terrible” of Philippine Theatre, Juan's visually poetic and expressive physical style of theatre has certainly created an impact on his audiences and recent generations of artists of the Philippines as well as on artists and students in other countries where he has taught. To Juan's disciplined mentorship is credited the success of many emergent directors, actors, and playwrights.  His students have won awards for Playwriting, Acting, and Directing both nationally and internationally.  Juan was selected as one of the 100 Philippine Artists awarded the CCP Philippine Centennial  Honors for the Arts, who have contributed significantly to and made an impact on the evolution of Philippine culture. He has also received the Balagtas Award from the National Writers’ Union of the Philippines for his body of works, and has won several Playwriting awards from the Carlos Palanca Literary Awards.  Juan has received Fellowships and Awards from prestigious institutions, among them the Rockefeller-Bellagio Foundation Fellowship for senior artists, the Fulbright Foundation, Hitachi Foundation of Japan, Jack Lang Scholarship in France, Asian Cultural Council in New York, the Association of French Artists and the Ministry of Culture of France, the Ministry of Education of Greece, and the Italian Ministry of Foreign Affairs, and the British Council.