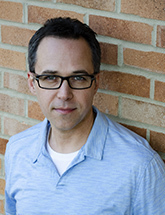 Jeff has worked in the video game and animation industries since 2002. Jeff has worked as a Lead Cinematics Director, Animator, Sound Designer, and Senior Video Editor for Electronic Arts, Sony Computer Entertainment, 2K Games, and THQ/Deep Silver. As both a staff employee and full-time freelancer, Jeff's work has been featured in more than fifteen games, including Evolve, Uncharted: Golden Abyss, Bioshock 2, Borderlands 2, The Bureau: XCOM Declassified, Saints Row I-IV, Mafia II, Spec Ops: The Line, Resistance: Retribution, Syphon Filter: Logan's Shadow, and NFL Street.
Jeff co-founded the independent game studio Resonator, and is currently working as art director on their debut PC and console title, Anew: The Distant Light (www.anewthegame.com). Anew has been selected to show at several game festivals, including Indie Megabooth at GDC and PAX East, The MIX at E3, Comicon, and Unity's Unite conference. Jeff is a contributing writer for Wireframe Magazine and lectures at top animation and game design universities and industry events.
Jeff graduated from the University of Notre Dame in 1999 with Bachelor's degrees in Film Production and Computer Applications, and from Rochester Institute of Technology in 2002 with a Master of Fine Arts degree in Computer Animation. Jeff's MFA thesis animated film from RIT, Intelligent Life, screened at more than fifty film festivals internationally. It won more than twenty awards, including a Best Animation nomination from the Academy of Motion Picture Arts and Sciences Student Academy Awards, and the Best Animated Short Film award at the South by Southwest Film Festival.
Upon graduating from Notre Dame, Jeff's students have placed in top graduate school programs and companies such as the University of Southern California, Rochester Institute of Technology, Savannah College of Art and Design, American Film Institute, Disney Feature Animation, Dreamworks TV and Feature Animation, Weta Digital, Method, Electronic Arts, 2K, Google, Boeing, and more.
Teaching
3D Digital Production for Animation and Video Games
Are you interested in the world of feature animation, visual effects, and video games? This class will be your first step in learning the tools and techniques of 3D digital content creation for the entertainment industry. You will learn the basics of modeling, texturing, animation, lighting, and rendering using the industry-standard program, Autodesk Maya. Through tutorials and projects, you will receive hands-on, practical experience in the major aspects of 3D production in Maya. You will also learn the foundational principles of animation, 3D design, and gain a broader appreciation of the historical context of 3D production through weekly lectures, critical studies reading assignments, screenings of animated films, and interactive playthroughs of console games.
Sound and Music Design for Digital Media
Writer-director George Lucas famously said that “sound is 50 percent of the movie going experience.” Director Danny Boyle mentioned in an interview, “The truth is, for me, it’s obvious that 70, 80 percent of a movie is sound. You don’t realize it because you can’t see it.” Sound and music design for digital media is an oftentimes overlooked art form that is critical to the effective telling of a story. At its root, sonic design creates mood and setting - it engages the audience on a primal, emotional level, in ways that imagery cannot alone achieve. A cleanly recorded and creatively edited sound effects track can immerse an audience in a fictional, manufactured reality. Music, whether used sparingly or in grandiose fashion, can enhance or subvert the visual component of a film or video game to create cinematic magic. Through feature film screenings, video game play-through sessions, critical readings, video essays, and hands-on production assignments, students will gain a broader understanding of sound design and learn how to direct the emotions of an audience through creative recording, mixing, and editing of sound effects and music.
Advanced 3D Digital Production
You have learned the basics of 3D digital production in Maya, and your insatiable thirst for digital content creation cannot be quenched. Welcome to the next level - Advanced 3D Digital Production! In this class, you will move beyond the fundamentals of 3D production and tackle advanced concepts such as complex object and character creation, digital sculpting and painting, keyframed and motion-captured character animation, and more. You will be treated as professional artists, so accordingly, expectations for timely, high-quality final deliverables will be high. In addition to your production assignments, you will learn more about the aesthetics, history, and cultural relevance of a variety of digital media texts through reading assignments and screenings.

The Animation Course: History, Practice, Forms, and Cultures
Animation is everywhere. In feature films, video games, visual effects sequences, live-action shows, Saturday morning cartoons, documentaries, television ads, mobile phone apps, websites, movie trailers, title sequences, social media content, roadside billboards, art installations, and more - we are surrounded by animation and it permeates our visually-oriented world. Now more than ever, it is important to understand what animation is, its origins, the multitude of forms it can take, how it represents diverse cultures and ideas, and of course - how to create it. We will learn the history of the art form from the late 19th century to present; different techniques used in its creation, including hand-drawn, experimental, stop-motion, and computer-generated; and how it represents a variety of global cultural perspectives. We will approach these topics critically, and then apply what we learn toward animation production projects using Adobe Photoshop, Premiere, and After Effects. Through critical reading assignments, video essays, film screenings, and hands-on production assignments, we will gain a holistic understanding and appreciation of animation as an art form as well as practical skills that can be applied to a variety of higher level courses and creative careers. This is a hybrid critical studies and production course, and as such, we will "learn by doing" in both lecture and lab settings.