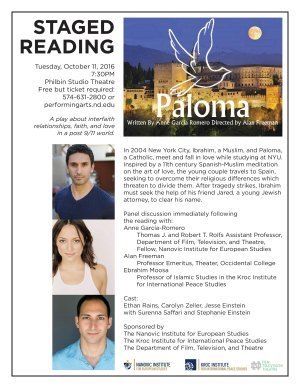 A play about interfaith relationships, faith, and love in a post 9/11 world.

In 2004 New York City, Ibrahim, a Muslim, and Paloma, a Catholic, meet and fall in love while studying at NYU.  Inspired by a 11th century Spanish-Muslim meditation on the art of love, the young couple travels to Spain, seeking to overcome their religious differences which threaten to divide them. After tragedy strikes, Ibrahim must seek the help of his friend Jared, a young Jewish attorney, to clear his name.

with Surenna Saffari and Stephanie Tucker