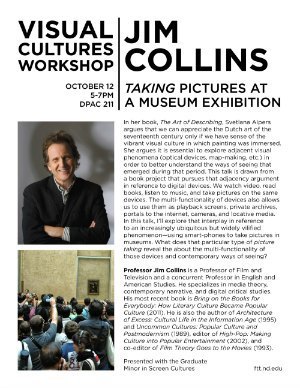 Taking Pictures at a Museum Exhibition

In her book, The Art of Describing, Svetlana Alpers argues that we can appreciate the Dutch art of the seventeenth century only if we have sense of the vibrant visual culture in which painting was immersed. She argues it is essential to explore adjacent visual phenomena (optical devices, map-making, etc.) in order to better understand the ways of seeing that emerged during that period. This talk is drawn from a book project that pursues that adjacency argument in reference to digital devices. We watch video, read books, listen to music, and take pictures on the same devices. The multi-functionality of devices also allows us to use them as playback screens, private archives, portals to the internet, cameras, and locative media. In this talk, I'll explore that interplay in reference to an increasingly ubiquitous but widely vilified phenomenon—using smart-phones to take pictures in museums. What does that particular type of picture takingreveal the about the multi-functionality of those devices and contemporary ways of seeing?

Jim Collins is a Professor of Film and Television and a concurrent Professor in English and American Studies. He specializes in media theory, contemporary narrative, and digital critical studies. His most recent book is Bring on the Books for Everybody: How Literary Culture Became Popular Culture (2011). He is also the author of Architecture of Excess: Cultural Life in the Information Age (1995) and Uncommon Cultures: Popular Culture and Postmodernism (1989), editor of High-Pop: Making Culture into Popular Entertainment (2002), and co-editor of Film Theory Goes to the Movies (1993).