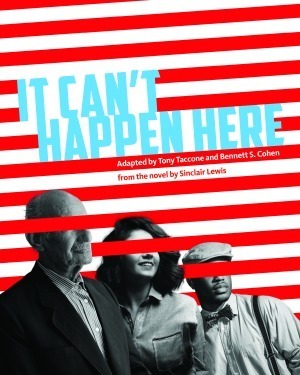 Adapted by Tony Taccone and Bennett S. Cohen from the novel by Sinclair Lewis

Part of A Nationwide Reading led by Berkeley Repertory Theatre

In 1935, Sinclair Lewis wrote It Can’t Happen Here, a novel that imagines the rise of fascism in America. Concerned about race riots, a huge income gap between the rich and the poor, the stigmatizing of immigrants, global terror, and a right-wing extremist running for president, the novel reads like it was ripped out of today’s headlines. Whether he’s describing Buzz Windrip, the demagogue who wins the presidency based on the promise of making our country great again, or Doremus Jessup, a liberal newspaper editor who simply waits too long to take Windrip seriously, Lewis’ understanding of our political system was precise and far-reaching.

In 1936, the novel was adapted into a play and theatres across the country opened productions on the same night - October 27, 1936. To commemorate the 80th anniversary of those productions, FTT joins regional theatres, universities, and communities across the country in presenting a staged reading of a new adaptation by Berkeley Repertory Theatre’s Artistic Director Tony Taccone and screenwriter Bennett S. Cohen.

This new adaptation of Lewis’s classic had its world premiere performance at Berkeley Rep on September 30, 2016. FTT’s reading will be directed by Aaron Nichols and feature a cast of both Notre Dame students and members of the South Bend community.

A Nationwide Reading is made possible thanks to the generous support of Barbara and Rodgin Cohen and Orin Kramer and is presented in cooperation with the Sinclair Lewis Estate. FTT's reading is sponsored by Notre Dame Film, Television, and Theatre, the Notre Dame Debate Team, and Notre Dame's Department of American Studies.

Free and open to the public; tickets required.  Reserve tickets