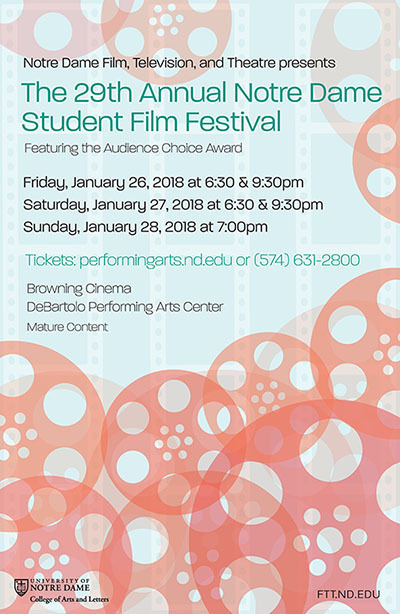 The Notre Dame Student Film Festival screens films made by ND undergraduates during the past year as class projects. These students study the art of filmmaking in advanced, intermediate, and introductory film production courses taught in the Department of Film, Television, and Theatre.  All films are shot on location and often feature the acting talents of Notre Dame students and faculty. Audience members are invited to vote for their favorite film via text message, and the Audience Choice Award is presented after the final screening (Sunday, January 28).

Hive
Ryan Taylor, Erin Lattimer, John McDonough, Ryan Leen
In the not too distant future, some words aren’t meant to be spoken.

The Aftermath
Kay Bontempo, Hanna Zook
Kayla tries to forget and move on.

Sam
Audrey Grewe
You’ve never met anyone quite like Sam Grewe, but he’s no big deal to his sister.

Breaking the Cycle
Indi Jackson, Vincent Augusto
The hurdles are higher off the track for a record-breaking student athlete.

Aftertaste
Indi Jackson, Reinaldo Angola-Hernandez
A dancer deals with the sounds inside her head.