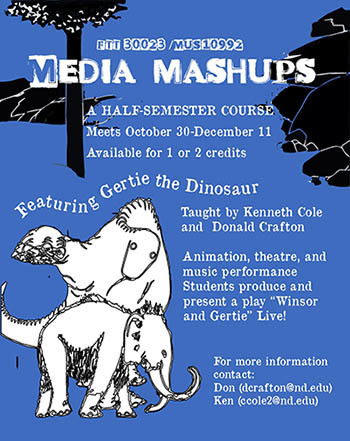 No preparation required; auditioners will be asked to read scenes from the play. No need to sign up ahead of time - just show up.

2-3 rehearsals per week will be scheduled according to actor availability. Actors must be available on Thursday, December 5 (dress rehearsal) and Friday, December 6 (performance).

All majors welcome - open to all ND/SMC/HCC students. Actors of all races and ethnicities are encouraged to audition.

Winsor McCay was an important editorial cartoonist and comic strip artist at the turn of the twentieth century. He also was a pioneer in the new movie form, the animated cartoon. He is best known for his 1914 masterpiece, Gertie. Professor Don Crafton has been collaborating with international film archives to reconstruct the film in its original version, which was part of a live stage performance. McCay toured with the film and presented it to vaudeville audiences throughout 1914, after which it was made into a movie version for cinema theaters. It is that first live act that we are reviving.

The film is eight minutes—but it was the longest cartoon made at that time. McCay would present it onstage as if he were interacting with a trained animal. It is a remarkable multimedia effect that still works today. The film is embedded within Crafton's play, Winsor and Gertie, to give current audiences a sense of the film, theater, and popular culture background, how the film was made, and who McCay was. It runs about an hour.

WINSOR MCCAY was in his mid-40’s in 1914, when the play is set. He is America’s leading comic strip artist, famous for his “Little Nemo in Slumberland” and “Dreams of the Rarebit Fiend” comics. He is the chief editorial cartoonist for William Randolph Hearst’s newspapers. He was also a pioneer of the animated movie cartoon.

MAUDE MCCAY is the wife of the main character, Winsor McCay, who is working obsessively on his animated film, Gertie, to the detriment of his family relationships. Maude is in her mid-30s and about ten years younger than her husband. She is a well-to-do upper middle class-homemaker typical of her time and place in New York City society.

ROBERT MCCAY, the son of Maude and Winsor McCay, was 18 in 1914, when the play is set, but we are depicting him as a bit younger. He is assisting his father in his studio, but he would rather be hanging out with his friends. He’s a bit of a klutz, which annoys his dad, but they have an affectionate father-son relationship.