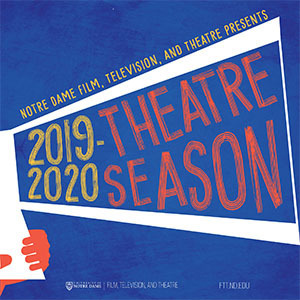 Notre Dame’s Department of Film, Television, and Theatre (FTT) announces four productions for its 2019/20 theatre season, including three new plays written by Notre Dame faculty and students, a Tony-nominated rock opera, as well as a festival of staged readings.

Kicking off the season will be a series of staged play readings and academic engagement events celebrating the legacy of the prolific Cuban American playwright María Irene Fornés (1930-2018), in conjunction with the national Celebrando Fornés/Celebrating Fornés 2019-2020 initiative, a year-long event that seeks to raise awareness of Fornés’s impact on theatre and preserve the legacy of her work. Curated by FTT professor Anne García-Romero, a former student of Fornés, The Fornés Festival (October 2-13) will present staged readings of four of Fornés’ most notable works: Fefu and her Friends (1977), directed by Stacy Stoltz; Mud (1983), directed by Carys Kresny; The Conduct of Life (1986), directed by Anton Juan; and The Summer in Gossensass (1997), directed by Mary Beth Fisher. The festival will also include a screening of the award-winning documentary portrait of Fornés, The Rest I Make Up (2018), directed by Michelle Memran, in the Browning Cinema.

Later in the fall, FTT presents the area premiere of Anne García-Romero’s Staging the Daffy Dame (November 20-24). The play centers on a Latina theatre professor who employs non-traditional casting while staging a Spanish Golden Age comedy on a present-day college campus, provoking heated conversations about race, class, gender, and immigration. Director of Theatre Kevin Dreyer, who directed García-Romero’s Provenance for FTT in 2012, will direct.

The spring semester kicks off with ND Theatre NOW! (February 20 – March 1), a special event in the mainstage season that annually features a production realized entirely by student artists.  This year, FTT presents two new one-act plays written by students – Coats, an absurdist comedy by Henry Stone ’21, and The Tea on ND, by Samuel Jackson II ’20, an acerbic exploration of class, race, and mental health in the Notre Dame community. Created in FTT’s playwriting program, led by professor Anne García-Romero, both plays will be further developed in a fall workshop class and directed by Notre Dame seniors – Coats by Patrick Starner and The Tea on ND by María Amenabar Farias.

The season will culminate in April with Jesus Christ Superstar (April 1-5), a 1970 rock opera with music by Andrew Lloyd Webber and lyrics by Tim Rice. FTT presents this musical exploration of the final week of Jesus’ life in the week leading up to Easter. Matt Hawkins, head of FTT’s musical theatre program, will direct.

“In theatre we often say, ‘If you are standing still, you are going backwards,’ because we are always looking for something new,” says Dreyer. “This year we are striding forward with new work by students, a new play by a faculty member, a new event with our Fornés Festival of staged readings, and a new vision for a story that is more than 2,000 years old.”

Additional discounts available for groups of 10 or more.  Buy a subscription (prices through August 25: $20 student, $30 faculty/staff/senior, $40 general; prices starting August 26: $22 student, $33 faculty/staff/senior, $44 general) and save 25-35%.  Subscription packages include one ticket to all four shows and have added benefits. Subscribers select one of The Fornés Festival readings to attend as part of their subscription package; tickets to additional readings may be purchased for $5.

Tickets may be purchased online at http://performingarts.nd.edu, by phone at 574-631-2800, or in person at the DeBartolo Performing Arts Center ticket office. Ticket office hours are Monday­-Friday, 12:00-6:00 pm.