Amanda Bartolini and Maddie Landon create fake wounds in Special Effects for Studio and Stage, a new course offered in the Department of Film, Television, and Theatre.

One semester is all Ken Cole needs to teach his students how to control the weather.

In a new course, Special Effects for Studio and Stage, the associate professional faculty member taught Department of Film, Television, and Theatre (FTT) students how to brainstorm and design a wide range of practical illusions for use in creative productions.

The group of about 10 students simulated explosions, used makeup to create realistic-looking wounds, built props out of scraps and spare parts—and, yes, conjured up a realistic rainstorm.

“The goal was to allow our students to experiment in technologies and effects that they wouldn’t encounter in their normal course of classes or projects,” said Cole, who debuted the course in spring 2015. 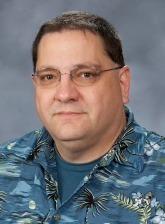 Cole’s lessons on creating weather effects were put to use early in the semester for a February production of the 1995 José Rivera play Cloud Tectonics, directed by FTT Professor Anton Juan at the DeBartolo Performing Arts Center.

Knowing the show called for simulated showers, Cole assembled his students into groups, and assigned them to research the most practical ways to make it look as though it was raining on stage. The students submitted their reports, and the best ideas made it into the actual production.

The end result involved running hoses from sinks in the scene shop to soaker hoses that were attached to a raised catwalk above the stage.

The early assignment was one of the most memorable for Ben Woodley, a junior majoring in FTT and information technology management. It provided hands-on experience analyzing a production’s budget, he said, so students could decide what effects were not only convincing but also affordable.

“The first time we got it to work,” he said, “there was just this unbelievable feeling of wanting to run through the rain.”

Cole began planning the advanced special effects course about two years ago. He wanted Notre Dame students to have the kinds of practical skills that could help them land production jobs in theaters or studios.

Say, for example, one of his former students is working as an assistant on a film that suddenly needs to show a hand crawling across a table all on its own. Cole wants the student to be able to quickly deliver a solution on how to create that effect—without the help of computer-generated imagery.

In those cases, the graduates who know how to create practical effects are the ones who will have a competitive edge in the job market, Cole said. For Michael Burns—a senior FTT major and the stage manager for the Cloud Tectonics production—the course offered the chance to learn skills he couldn’t have acquired anywhere else.

“It gave me a much wider variety of knowledge than what I already had, and more than I could learn just working in the shop,” he said.

After graduation, Burns hopes to land a technical job in a theatre, building and breaking down sets and designing effects. Cole’s class helped him learn what would be expected in such a position.

It also gave him the chance to learn from classmates planning to work in film and TV production.

While developing special effects, those students were considering how studio lighting and cameras would depict what was happening. Those aren’t the same kinds of questions theatre students usually ask, Burns said, so it was beneficial to see things from a different perspective.

“They knew a little more about certain types of lighting affecting a certain type of shot,” he said. “We don’t deal with that on an everyday basis.”

Cole’s hope is to offer Special Effects for Studio and Stage again in the fall 2016 semester to juniors and seniors who have already completed the college’s basic production courses.

In future years, he hopes to attract a variety of professionals from the field who can teach students about new trends in studio and theatre productions, as well as what skills they’ll need to master those effects.

“Then, they can take that experience into a job and have a great jumping-off point,” Cole said.