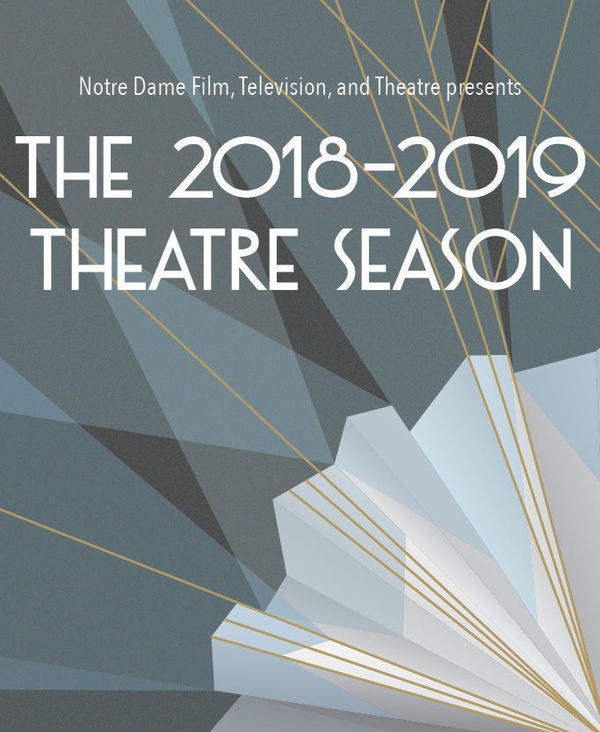 Notre Dame’s Department of Film, Television, and Theatre (FTT) announces four productions for its 2018/19 theatre season, including a classic French comedy, the world premiere of a student-written musical, and an adaptation of the beloved American novel, The Great Gatsby.

Kicking off the season will be ND Theatre NOW! (September 27 – October 7), a slot in the mainstage season which annually features a production realized entirely by student artists. This year, FTT presents two one-act plays with an absurdist take on the American Dream – WASP by Steve Martin, directed by Najmeddine Harrabi ’19, and American Roulette by Tom McCormack, directed by Róisín Goebelbecker ’19.

Later in the fall, FTT presents Molière’s satirical farce The Imaginary Invalid (November 14-18), adapted by Constance Congdon and based on a new translation by FTT alumnus Dan Smith ’98. Awash in medical bills, a determined hypochondriac desperately tries to marry off his daughter to a doctor in order to acquire free medical care. Carys Kresny will direct.

The spring semester kicks off with a world-premiere musical, Stupid Humans, with book and lyrics by FTT junior Jorge “Jay” Rivera-Herrans and directed by FTT’s head of musical theatre, Matt Hawkins (February 21 – March 3). Throughout the fall semester, Rivera-Herrans and Hawkins, who have been collaborating on script development for the past year, will be workshopping the musical with FTT students through a new musical theatre lab course led by Hawkins.

The season will culminate in April with F. Scott Fitzgerald’s The Great Gatsby (April 10-14), adapted by Simon Levy and directed by FTT’s Anton Juan. Levy transforms Fitzgerald’s novel into a streamlined yet faithful adaptation, bringing the opulence and excess of the Jazz Age to the Decio stage.

“It seems these days we live in a world where nothing is as it seems and rarely goes as we planned,” says FTT’s Director of Theatre, Kevin Dreyer. “This year’s theatre season looks at our world through a broad range of material - absurdist comedy, musical drama, slapstick farce, and a classic American novel -  all combining to help us make sense of this wonderfully diverse nation in which we live.”

The Imaginary Invalid
By Molière
Adapted by Constance Congdon from a new translation by Dan Smith ’98
November 14-18, 2018 in the Patricia George Decio Theatre

The Great Gatsby
By F. Scott Fitzgerald
Adapted for the stage by Simon Levy
April 10-14, 2019 in the Patricia George Decio Theatre

Additional discounts available for groups of 10 or more.  Buy a subscription ($22 student - $33 faculty/staff/senior - $44 general) and save 25-35%.  Subscription packages include one ticket to all four shows and have added benefits.  Tickets may be purchased online at http://performingarts.nd.edu, by phone at 574-631-2800, or in person at the DeBartolo Performing Arts Center ticket office. Ticket office hours are Monday­-Friday, 12:00-6:00 pm.