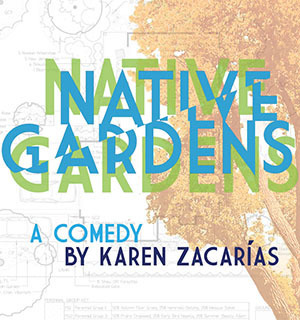 The University of Notre Dame’s Department of Film, Television, and Theatre (FTT) announces Karen Zacarías’ Native Gardens, a good-natured comedy about new neighbors, border walls, and what it means to be American, in the Philbin Studio Theatre at the DeBartolo Performing Arts Center, February 22 – March 4.

Pablo and Tania, a young Latinx power couple, just bought a fixer-upper in an historic Washington, D.C. neighborhood. They’re welcomed warmly by their new next door neighbors, Frank and Virginia, an older white couple who happily anticipate improvements to the unkempt yard next door. But soon the couples are embroiled in a dispute over their backyard property line that threatens to uproot Frank’s meticulously cultivated garden and forces both sides to confront deeply ingrained notions of race, class, and privilege. Whether wielding a chainsaw or chaining their own bodies to a tree, each couple soon reveals how far they’ll go to defend their territory.

Commissioned and first produced in 2016 by Cincinnati Playhouse in the Park, Native Gardens has since swept across the country, with recent productions in Chicago, Washington, D.C., Minneapolis, Orlando, San Diego, and Houston.

“There’s something both recognizable and hilarious,” says director Kevin Dreyer, “about the inherent awkwardness of the situation, the self-conscious interactions of strangers trying to be friends, which at times ratchets up to the level of slapstick.”

“Native Gardens deals with some divisive political issues,” says Dreyer, “but ultimately the play finds a pathway to common ground through gentle humor and the shared humanity of its characters. In that sense, it’s a breath of fresh air. And don’t we all need a little more of that these days?”

Additional discounts available for groups of 10 or more.  Tickets may be purchased online at http://performingarts.nd.edu, by phone at 574-631-2800, or in person at the DeBartolo Performing Arts Center ticket office. Ticket office hours are Monday­-Friday, 12:00-6:00 pm.