Two faculty members and former chairs who were instrumental in the development of the Department of Film, Television, and Theatre are taking their final bows.

Mark Pilkinton, who expanded the department in the 1980s and pushed for the building of the DeBartolo Performing Arts Center, retired this summer. Donald Crafton unified the department during his tenure as chair and expanded it to include film and television studies. He will retire after the fall semester. 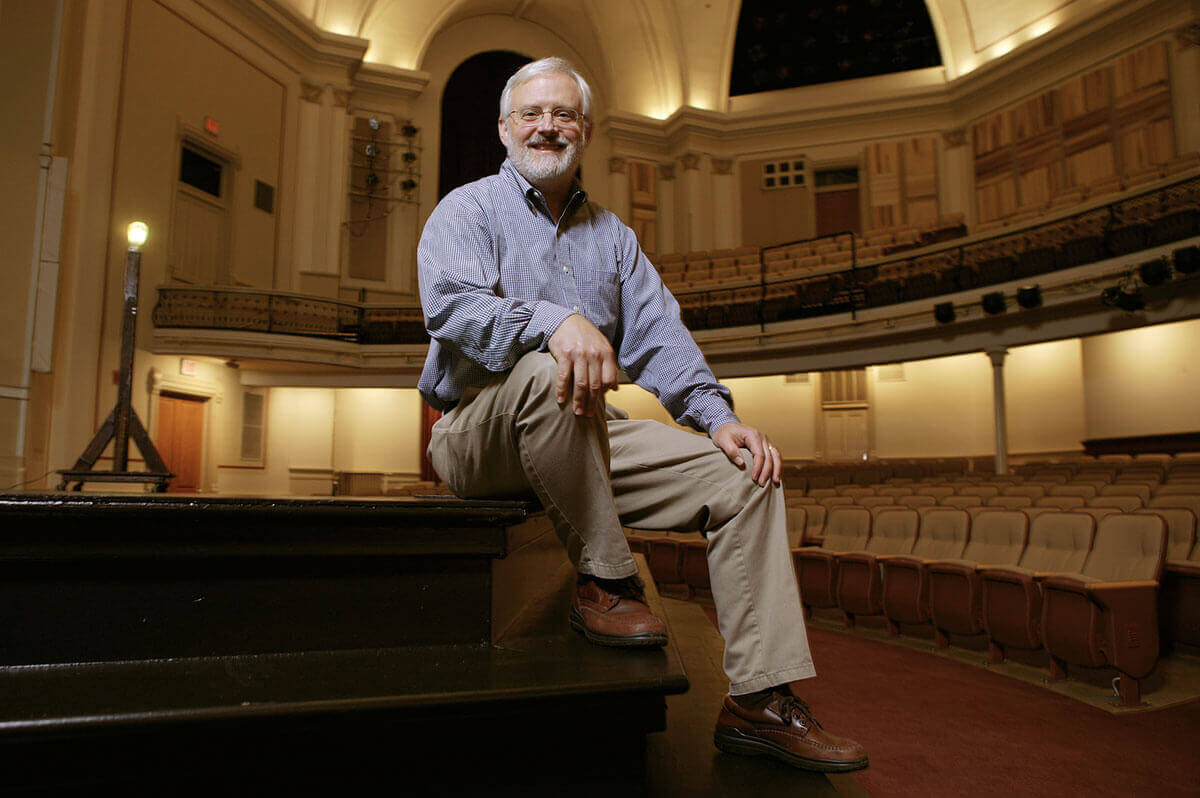 Mark Pilkinton inside Washington Hall, where he brought theatre back to Notre Dame’s campus in the 1980s. Photo by Matt Cashore/University of Notre Dame

When Pilkinton came to Notre Dame as department chair in 1984, there was no theatre being performed on campus. Shows had been moved to the St. Mary’s College campus some time before.

His charge was to bring the program back to Washington Hall, the historic building that had housed theatre at Notre Dame since 1882. And he did that, while also setting a new direction for how students function within the program—a hallmark of Notre Dame’s theatre productions ever since.

Kevin Dreyer, associate professor and director of theatre, said the program had been caught up in “theatre of human sacrifice.” Students worked into the wee hours of the morning—allowing classes, their sleep and other activities to become secondary and, in some cases, to suffer.

“Mark came in with the attitude that these are students first and actors second,” Dreyer said. “If we do not stop our rehearsals at a reasonable hour, when are they supposed to do their studies, to be the students they came in here to be? That right there shaped a great deal of the nature of the department.”

Bringing theatre back to the Notre Dame campus, Pilkinton said, is one of the achievements of which he is most proud.

“We had an extremely successful period of theatre here,” Pilkinton said. “We had packed houses at Washington Hall. We had shows where—in the case of Amadeus—they were scalping tickets.”

Besides the experience of producing a quality show, Pilkinton said, theatre gives Notre Dame students the skills to accomplish anything.

“Theatre teaches students everything they need to know about life,” he said. “If you can stage-manage a show, you can run a corporation. You can do anything.”

Pilkinton, who directed 15 FTT productions, focused his research on early English drama and drama of the Middle Ages. He taught everything from acting to theatre history, and he authored Records of Early English Drama: Bristol in 1997, a record of the period from available manuscripts.

His love of scouring archives led him to write Washington Hall at Notre Dame: Crossroads of the University, 1864-2004, the definitive history of the University’s storied theatre. He also founded the New Playwrights Workshop in 1998.

“I was always doing the creative side of theater, and the scholarly side as well,” he said.

In retirement, Pilkinton plans to travel more and continue to edit “Theatre Chronology,” a database that documents faculty-directed, student-driven, or co-curricular productions at Notre Dame back to 1845. 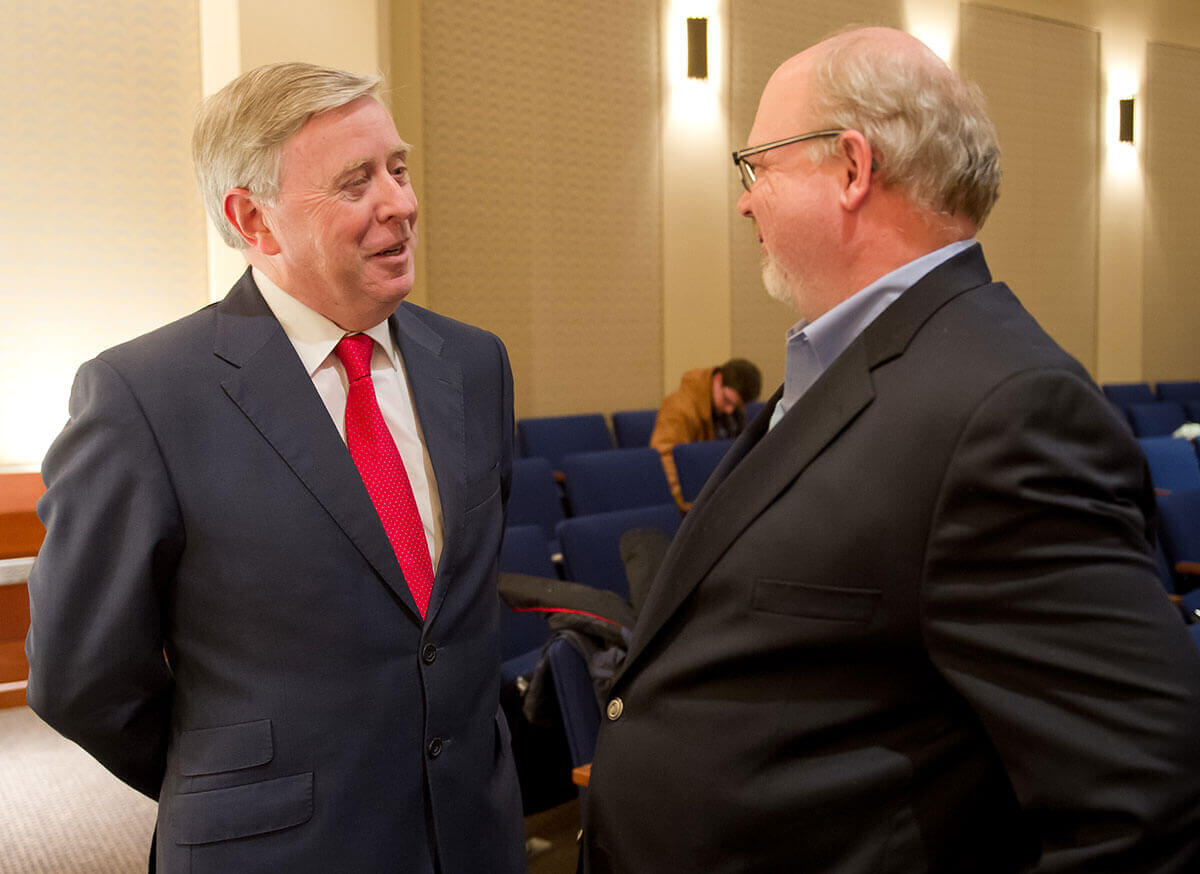 Donald Crafton (right), then-interim director of the Nanovic Institute for European Studies, talks with Pat Cox, the former president of the European Parliament, before an event on campus in 2013. Photo by Matt Cashore/University of Notre Dame

When Crafton came to Notre Dame in 1997 and became head of what was then the Department of Communication and Theatre, his mission was to unify an entity that had explored dividing into separate theatre and film studies departments.

Instead of splitting, Crafton led the effort to refocus, resulting in the renaming of the department to Film, Television, and Theatre and the addition of new courses and tracks.

“He worked to really draw us together as a full department—where we are now, all working in the same building, and happy to find we have a highly compatible group of colleagues,” Dreyer said.

Crafton was instrumental in the planning of the DeBartolo Performing Arts Center, ensuring that the cinema was designed with cutting-edge technology. He also chaired the Department of Music for three years.

In his retirement, Crafton will continue his research. He is widely considered the pre-eminent scholar on early animation. His books include Before Mickey: The Animated Film, 1898-1928 and Shadow of a Mouse: Performance, Belief, and World-Making in Animation.

“When I wrote Before Mickey, most people were surprised there was any animation before Walt Disney,” he said. “But there was almost a quarter-century of animation downstream Disney built on.”

Crafton’s work brought to light the hard work done by early animators who created characters such as the original Felix the Cat and Koko the Clown. Animation is, to him, “a way to imagine other worlds and imagine other people, to relate to experiences one would never have under any other circumstances.”

There is an argument, he said, that animation is a type of performance art, like stage theatre or dance. But there is more capacity for perfection in animation, which allows the creator’s true vision to shine through.

“I love the control, the fact that there are no accidents. Everything is planned in advance and executed according to that plan,” Crafton said. “It is a kind of clockmaker’s art, in some ways. It is the most transportive and most imaginative form of film.”

Crafton said he will miss the camaraderie amongst his fellow faculty members and the joy he found sharing his love of movies with students.

“I’m one of those fortunate people who can say that I do what I have always wanted to do, which is teach students about film, share their contagious enthusiasm, and watch movies, research movies, and write about movies,” Crafton said.