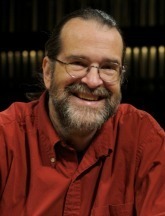 Kevin Dreyer is an experienced lighting designer with an active freelance career.  He has designed for major companies across the United States and around the world with reviews and award nominations from four continents.  He has been on the faculty at Notre Dame since 1989, where in addition to teaching he has designed lighting and scenery for the theatre season.  In recent years he has added the responsibilities of producing and directing for the University.  He developed the Stage Management curriculum and advises all student stage managers for FTT productions.  His whole family is in the arts, with his wife directing the Saint Mary's College dance program and his three daughters all involved in theatre as either performers or educators.

Kevin's work as a lighting designer has been seen in Chicago and around the world with the Joffrey Ballet and Giordano Dance Chicago.  In addition he has designed for Chicago Shakespeare Theatre on the Navy Pier.  He has guest taught at Northwestern and Carnegie Mellon.  He is currently developing a new production of A Christmas Carol which he will direct at the South Bend Civic Theatre as part of the South Bend 150th celebration.