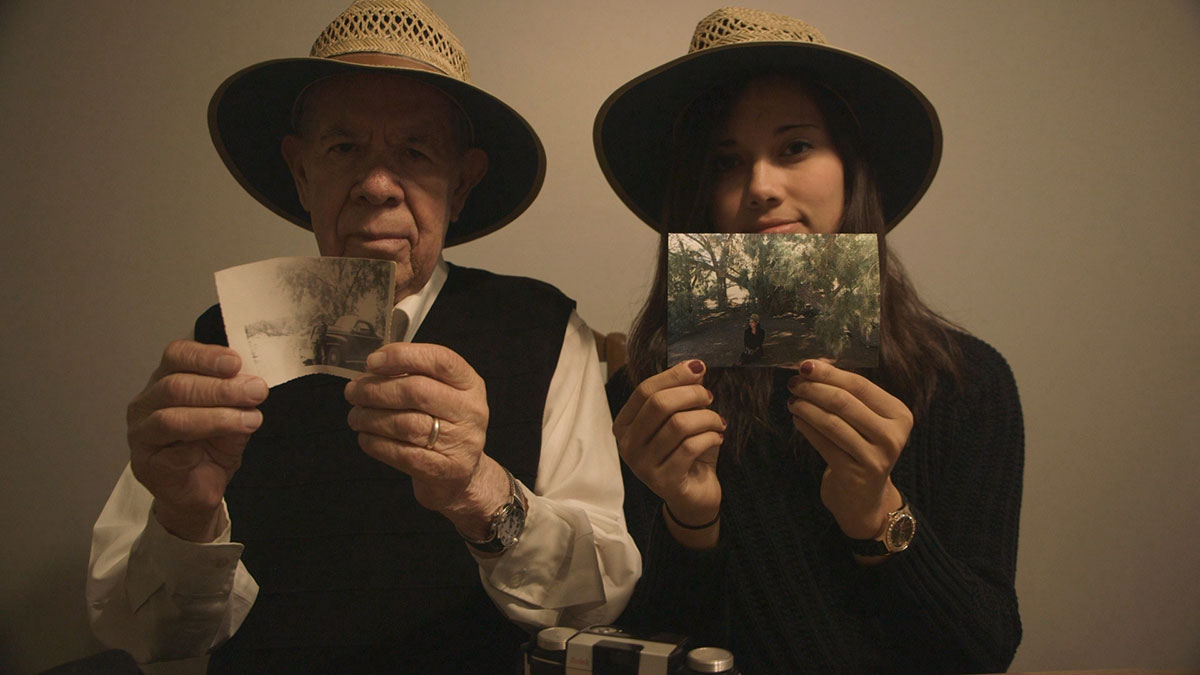 Crystal Avila ’17 and her grandfather, Jesύs Villanueva, in a scene from her documentary, Beneath the Trees.

In the first film, television, and theatre course she took at Notre Dame, Crystal Avila ’17 was assigned to write her own graphic novel.

She chose a story that was close to home. Her grandfather, Jesύs Villanueva, had recently been diagnosed with memory loss. 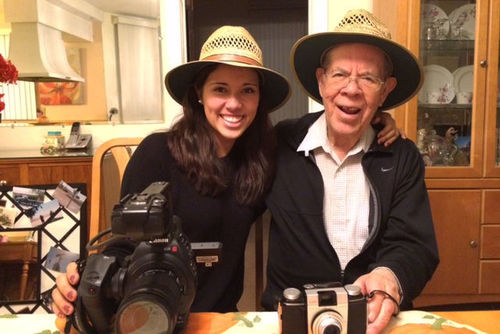 “That was something very hard for my whole family, and it was hard for my grandfather,” Avila said. “When I found out, I was very sad. I thought, ‘How can I use what I do, my medium of telling stories, to preserve his memories?’”

Over the next few years, Avila discovered documentary filmmaking as an intersection of journalism, art, music, and storytelling. She also continued to talk to her grandfather in Chicago as his memory declined, asking him to share his life experiences. For her senior thesis, her interests coalesced into a documentary, Beneath the Trees (Debjao de los árboles).

The film tells the story of one memory, one episode in her grandfather’s life that he returned to over and over, Avila said.

More than 60 years ago, Villanueva had traveled from his home in a small village in Mexico to the United States border. It took several tries, involving a 10- to 15-mile walk, to actually get across.

Once he was in the U.S., Villanueva stayed in Yuma, Ariz., where he got a job picking cotton for 35 cents a day. Without a home, he slept beneath trees for years.

“There was more opportunity in America, and he wanted his family to have a better life,” Avila said. “He said, ‘I may have a lot of hardships, but I’m doing this for my family.’ He went through his whole process of immigrating with this attitude of self-giving.” 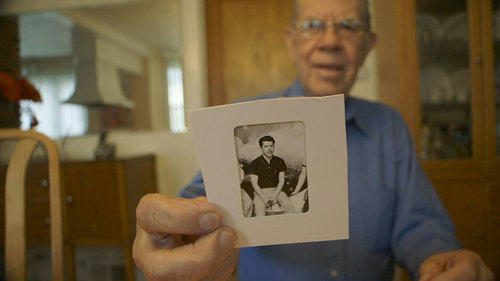 Beneath the Trees features many photographs Villanueva took after coming to Arizona from his small village in Mexico.

Avila filmed the documentary during the summer and fall of 2016. She traveled to Chicago several times to interview Villanueva, showing him and her grandmother, Maria, the footage after each interview. The interviews heavily featured pictures Jesύs had taken during his time in Yuma.

“I thought that collision of my memory with his memory is really fascinating,” Avila said. “I thought that the reason he was remembering this more than other memories was because he was almost a documentary photographer himself.”

The production was a family affair — Avila’s mother and youngest sister helped with producing and filming, and her sister, Jasmin Avila, wrote and sang three songs for the film. During filming, they traveled to Yuma to retrace Jesύs’ steps.

“Coming to Yuma, he started to plant his roots in the United States, and because he did that he grew tall into our family,” she said. “I’m able to be here in Chicago working and went to Notre Dame because he planted those seeds.”

“We’re extremely proud of Crystal’s film because it’s so accomplished in visual terms but also profoundly moving. There are a lot of things that I love about Beneath the Trees, but what impresses me most of all is her ability to use digital technology to envision her relationship with her grandfather.”

“We’re extremely proud of Crystal’s film because it’s so accomplished in visual terms but also profoundly moving,” said James Collins, professor and chair of the Department of Film, Television, and Theatre. “There are a lot of things that I love about Beneath the Trees, but what impresses me most of all is her ability to use digital technology to envision her relationship with her grandfather. She preserves memories, but she also creates new ones that will now become part of her family history.”

Majoring in FTT, Avila said, gave her access to the resources and technical skill she needed to make Beneath the Trees, as well as support and encouragement to pursue a passion project.  She said Olivier Morel, who taught Avila’s first course on graphic novels and later advised her senior thesis, gave her the freedom to take her project beyond Notre Dame.

“They say, ‘We give you the tools you need, but you have to use your brain and your heart to make your project,’” she said.

Avila, who is now working as a producer at a film company in Chicago and wants to make more documentaries about memory, said she hopes to make Beneath the Trees available online and to screen it in classrooms.

“Preserving the stories of our grandparents is so precious,” she said. “You have to take the time to sit down with them and capture their stories through whatever medium you have. 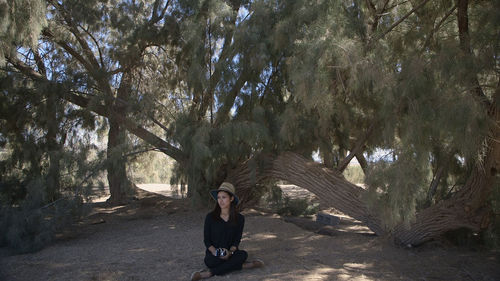 Avila in a scene from the documentary.

“I want that story to continue even after he passes. What he did, so many people can relate to — even if you’re not Mexican, everyone knows an immigrant. I want that to be something people can connect to, and I want people to be inspired to capture their own stories.”

And, just as Villanueva created memories by taking pictures of his time in Yuma, Avila and her family have created their own memories by making Beneath the Trees.

When the documentary won its award at the Notre Dame Student Film Festival, Avila pointed out her grandparents, sitting in the back row of the theater, to the audience. People asked to take pictures with her and them, she said.

“They felt very honored and special, when the story is about a time in his life when he did not feel honored or special,” Avila said. “It’s moving for them to see what has come out of the sacrifice that they made.”

Originally published by Emily McConville at al.nd.edu on April 26, 2018.