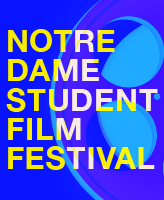 The Notre Dame Student Film Festival screens films that were made by undergraduate students during the past year in the Department of Film, Television, and Theatre. Audience members are invited to vote for their favorite film via text message, and the Audience Choice Award is presented after the final screening. Films may contain mature content.