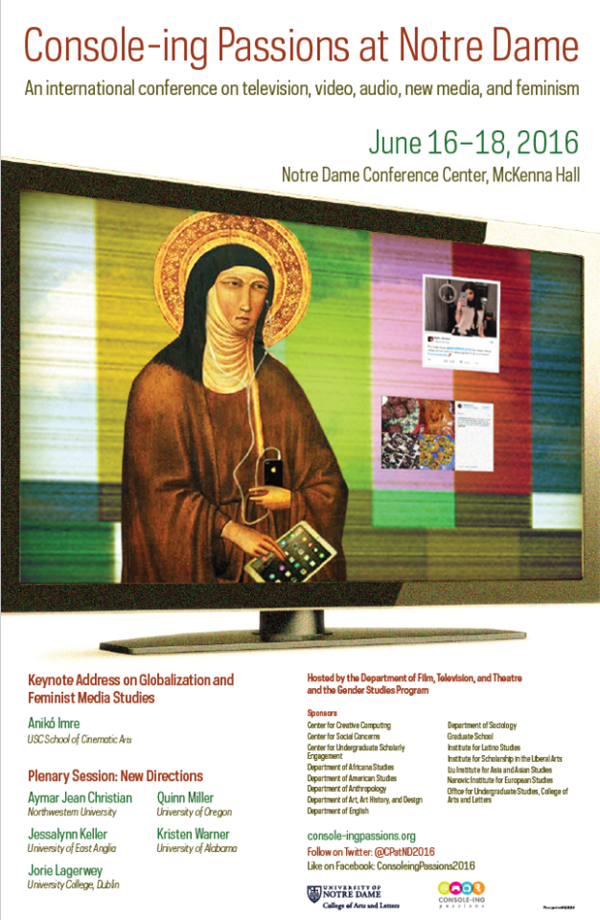 An interdisciplinary group of media critics and creators from around the world gathered at Notre Dame this summer to discuss issues related to television, video, audio, new media, and feminism.

Console-ing Passions, held on campus from June 16 to 18, began in 1989 as an effort by feminist media scholars and artists to foster new scholarship on television, culture, and identity.

Mary Celeste Kearney, a Notre Dame associate professor of film, television and theatre and director of the Gender Studies Program, sits on the conference’s board. She was a co-organizer of the conference, along with Christine Becker, Michael Kackman, Susan Ohmer, and Pamela Robertson Wojcik, all faculty in the Department of Film, Television, and Theatre.

“Console-ing Passions started out as being just about gender in television, but it’s expanded to people who work on new media, digital media and video games,” Kearney said. “Our conference has been a place for supporting our work and we wanted to pay back by bringing this community together.”

The international conference has been previously hosted by universities across the US, as well as Dublin, Ireland and Adelaide, Australia. Notre Dame hosted the conference once before, in 2000.

In addition to research presentations by over 200 individual scholars, this year’s conference featured several forums, which Kearney said gave attendees more of an opportunity to network with each other and speakers. Forums explored such topics as gender-based hate online, copyright in the digital classroom, and Tumblr and other digital media as sites of scholarly inquiry.

The event’s keynote speaker—Aniko Imre, chair of cinema and media studies at the University of Southern California’s School of Cinematic Arts—spoke about the development of eastern European television in the communist era. The conference also featured a plenary session, with five emerging scholars discussing recent opportunities and challenges they’ve faced.

“We had an array of people talk about how their work in gender in media has changed over their brief careers,” Kearney said.

About 250 people attended, an increase over the 150 to 200 who have attended past Console-ing Passions conferences—an indication of the growing discussions around gender and media studies, Kearney said.

“I think there’s been more attention to this particular area within media studies in the last few years,” she said. “There’s also been a really good energy around this conference.”

The full program for the Notre Dame conference—as well as a call for papers for the next Console-ing Passions conference to be hosted by East Carolina University—can be found at console-ingpassions.org.